It’s International Women’s Day and the BB team are celebrating women who encapsulate the meaning of #GIRLBOSS! There is something so empowering about watching women independently create their own success whether it’s a celebrity, well-known business woman, mother or a friend. That’s why it is so important to commemorate a day like International Women’s day and in our own BB tribute we have put together a variety of our favourite #GIRLBOSS movies, people and looks that will help you to be your own #GIRLBOSS every single day! Remember, it’s about building women up, not bringing them down.

Here are a few of our favourite #GIRLBOSS movies to get you in the strong, independent woman mood.

She’s the man is not only a ridiculously funny movie, but it also shows that women can do things (in this case soccer) just as well, if not better than a man.

Even though she’s animated it doesn’t mean Merida isn’t less of a #GIRLBOSS! Brave is the story of Merida, a courageous and skilled archer who wants to lead and carve out her own path in life and must rely on her courage and independence to right what’s wrong.

Katniss is known for her strength and for standing up for what she knows is right, even if it means risking her own life. Katniss is definitely someone to admire because of her #GIRLBOSS mentality.

Some of our fave real life #GIRLBOSSES:

Emma, most famously known as Hermione in the Harry Potter film series, has generated huge success not only in the film industry but also as UN Women Goodwill Ambassador and Fair Trade activist. In 2014, when she was appointed as a UN Women Goodwill Ambassador, she launched a campaign called HeForShe, which focuses on spreading awareness of gender equality and more specifically, calling men to join and advocate these equality issues. We love Emma for using her fame to address important gender and environmental issues, she is the definition of a #GIRLBOSS!

Leandra is the founder of the hugely successful fashion blog; Man Repeller, which encompasses the idea that women should not dress for the opposite sex but instead for themselves. She explains the term ‘Man Repeller’ as “she who outfits herself in a sartorially offensive mode that may result in repelling members of the opposite sex.

One of the most successful and entertaining pop stars on the Planet, Beyonce has sold over 118 million records as a solo artist and generated a net worth of $450 million. Self-described as a ‘modern day feminist’, Beyonce’s music features themes of female empowerment and sexuality, love, relationships. Beyonce’s fierce nature and her ability to tell stories of feminism through her catchy pop songs makes her one of our favourite #GIRLBOSSES, she is a huge inspiration to all women!

Check out some of our favourite #GIRLBOSS looks:

When you need to rule the boardroom: Aldrich Coat

The Slay All Day Tee 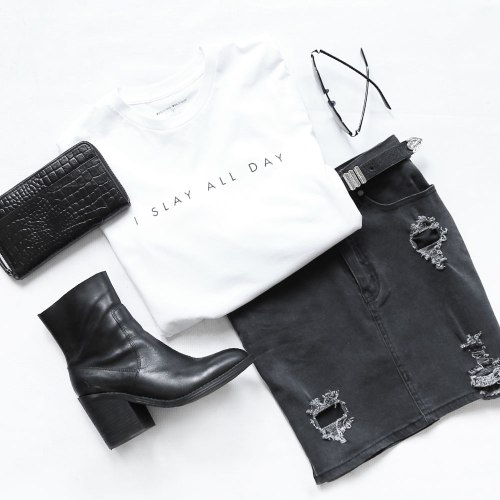 When you need to remind everyone who’s boss: Slay All Day Tee

The Feelin’ Myself Jumpsuit

When you just need to feel super spesh: Imperial Jumpsuit